Jay Rayner might be best known for his bitingly funny weekly restaurant reviews in the Observer. But he also produces eloquent, insightful writing on the workings of the wider food industry; as he did in his 2013 book "A Greedy Man in a Hungry World" which, by the way, comes highly recommended by hep. In a recent piece for the Guardian he looks at how Brexit is impacting the British food industry in general, and growers of fruit & veg as well as meat & dairy producers in part

The Beer from Palestine

A small village in the Palestinian West Bank may not be the most likely place one associates with the production of beer and wine. The Khoury family, founders & owners of Taybeh brewery & winery, tends to disagree. After long years in Boston, Nadim Khoury returned to the predominantly Christian village of Taybeh in his native Palestine. There he founded the Taybeh brewery with his brother David in 1994. Since no one wanted to invest into what seemed a crazy undertaking, the f 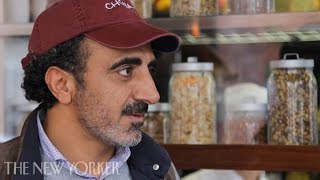 In a classic piece of outstanding food writing from the New Yorker food issue 2013 Rebecca Mead narrates the entrepreneurial story behind Chobani Yogurt, the US' leading ("Greek") yogurt brand, and its founder Hamdi Ulukaya, a Kurdish immigrant from Turkey. Not only does Mead describe the rapid rise of the company, the brand ('çoban' means 'shepherd' in Turkish) and of the entrepreneur behind its success, she also presents a short history of the commercial market for yogurt i

Award winning food writing: The last dinner in the Jungle

This is not, as this post’s title might suggest, about NOMA’s pop-up on the fringes of the Mexican jungle in Tulum, widely publicized but rightly criticized for its outrageous pricing and accused of ‘gastronomical colonialism’. Roads & Kingdoms - one of hep.’s favourite magazines on food, politics, travel & culture - has received the 2017 James Beard Award for best publication, while R&K’s Shane Mitchell’s article on the refugee camp on the outskirts of Calais, France, was aw

Award winning food writing: The last dinner in the Jungle

Thinking through food systems & sustainability: an attempt at categorization

Refugee Chef: food as a medium for social integration